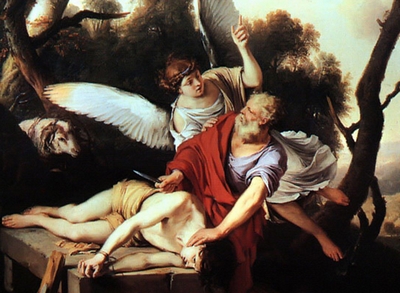 A keystone in Jewish and Christian belief is faith in God. The supreme example of faith is the Bible story where God commands Abraham to kill his own son Isaac as a sacrifice to God. Abraham agrees, and is praised for placing his loyalty above morality.

An atheist asks: "How can you believe in a God that would ask Abraham to kill his own son as a sacrifice? Should blind loyalty to God lead a man to commit evil, inhuman acts?  And what sort of a God is that?"

Makes you think of the Nazis, doesn't it? And raises the spectre of Pastor Jim Jones telling all those cult members to drink poison in Guyana. If God tells you to kill someone, should you do it?

It's a great question. But, like any good movie plot, there are several twists.

First, coming from an atheist this question is disingenuous - not entirely honest. An atheist lives in a world which is a random pile of atoms. Atoms have no morals. So it is illogical for atheists to recognize the existence of moral absolutes! They believe Man is the greatest thing in the universe - so who invented good and evil?

But in an atheist world how can anything be intrinsically evil? - there are no outside standards, only human opinion. In that world, "evil is in the eye of the beholder". So this atheist is adopting our standards to argue with us!

But it's still a good question. Why did God tell Abraham to kill Isaac?


... Let's look more closely at what happened in this story.

Everyone likes to be called "a person of integrity", someone you can trust, can rely on. If your partner is away on a business trip, lonely in a hotel bar, and meets an attractive person who's obviously interested in them, can you trust your spouse? How can you know?

You can only check someone's integrity by testing it! So God is testing Abe's integrity here - when it comes down to the wire, is he trustworthy? God manoeuvres Abe into a corner. Remember that Abe worships God, and worship (to him) involves giving something back to God, sacrificing something good. Even today Arabs welcome you by giving you something to eat as soon as you visit their house. (We don't sacrifice now - Jesus has sacrificed himself, once and for all.)

So it's time to worship God, and Abe has no gift to sacrifice! God says "Well, there's Isaac"... Now Abe is not stupid. He knows that he will miss Isaac hugely if he gives Isaac's life back to God, who gave him the boy. (He also knows Sarah will be unbelievably upset and angry with him - "you did WHAT??!!") But he is loyal to God, who has given him everything. So Abe has to choose - just like your spouse in the hotel bar.

The amazing thing was that Abraham trusted God to bring good out of this nightmare. You see, he could still hear God's words "Your descendants will be like the grains of sand on the shore" - and he believed that even if he sacrificed Isaac God would still keep the promise! He couldn't see how, but he had faith that God would sort it out somehow. Maybe bring Isaac back, or another son, or whatever. So Abe chose to go ahead and kill Isaac, because if God says so it must be right.

This is the hardest test anyone has faced (except for sacrificing your own life, like Jesus). It proved Abraham's faith in God to be enormous, and inspires Jews and Christians still. "Abraham believed God, and it was credited to him as righteousness" - a man of integrity. (In a way, Abe was testing God, too.)

To an atheist this looks very different. "Blind faith" is contemptible, the sign of a cult, becoming an unprincipled robot. The atheist says "I know what's good and what's bad. I may follow a leader, but never to the point of losing my principles and committing atrocities".

And there is the clue to the real problem ...

...  See what's happening here? It's human pride. I'm going to trust my judgement over God's. If we differ, I know better - I know for certain what's right and wrong.

Today's atheists say exactly this about premarital sex, or homosexuality. "We know better than that, your Bible is simply wrong, we trust our judgement above anything else." They said that when God told Wilberforce to speak out against slavery. They said that when God told Richard Oastler to stop small children being exploited in factories and climbing inside chimneys to clean them. Man's views keep changing - but he's always totally sure that he's right!

For a Christian, there is no contest. God is right. Some of us would explain it very simply: "loyalty verses morality" is a contradiction in terms when talking about God. There is "God's way" or "not God's way". Following God is always the right course of action because He is the one who determines what is right and wrong. Every now and then God speaks to us - and we need to listen and obey.

Some of us would se it this way. You don't argue with your Statistics Professor. If you can "see" the answer is X, and your Prof tells you no, it's 3X - you're wrong, period. He knows way more than you. You must be wrong, even if you can't see why yet. He's always been right before.

That is why we follow God. He made the universe. He knows what works and what doesn't - what's good and what's evil. He is Truth.

But what about the Jonestown massacre? Wasn't that a result of blind faith?

Yes. It was indeed. But were those thousands of people following and listening to God? Or were they following Ernest Jones? Google it and see for yourself.