Q.  Evolution proves there is no God? 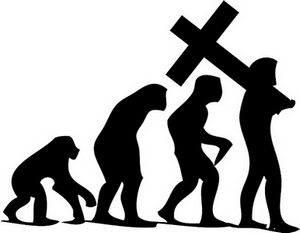 George Bush and many intelligent Christians believe this.  But they know from personal experience that God exists.  So they are obliged to disbelieve evolution.  This is "Creationism" - and causes endless arguments!

But this is silly.  Who cares whether evolution is true or not?  What matters is that Jesus died to wipe out our sins, and bring us back to our loving Father in heaven.  Why does evolution matter?  The Devil would MUCH rather we spend our time arguing about fossils we have never seen, or weird species on Pacific islands - or indeed ANYTHING but Jesus Christ.

So why waste time on how the universe began, or how mankind developed?  Leave that to the scientists.  God has much more important things for us to do.

Well OK, you're thinking, but surely - evolution proves that God didn't create us?

Does it?  Consider this little parable.

One Sunday two children returned home at midday, let themselves into the empty house [latch-key kids eh? - shameful!] and were greeted by a wonderful, mouth-watering smell of roast turkey.  They saw the turkey browning in the oven, potatoes roasting, carrots and peas bubbling in a pan on the hob, and plates warming in a drawer.

"Wow!" said Mary.  "Look - Mommy's made a wonderful lunch for us all, by magic, while she was at church with us!  Isn't she amazing?"  She surveyed the kitchen.  “She must have set up the stove in the first minute, the turkey in the second minute, this in the third minute, ...  and on the 7th minute she took a well-earned rest.  Mommy created lunch for us!”

But her brother was more curious, and looked carefully around him.  "No, wait" he said.  "I think - yes - I can see it all!  Look here, and here, and in there.  There's a revolving clockwork timer here, that turned the oven on an hour ago.  And here's a revolving timer that turned the hob on 10 minutes ago, and this one turned on the warming drawer.  See?"  He turned triumphantly to Mary.  "You're quite wrong!  It wasn't Mommy who made the lunch at all.  It all "just happened", due to revolving clockwork timers.  I can see the evidence!  I shall call it the 'Theory of Revolution'.”

Who is right?  DID Mommy create the supper, or not?

They're both partly right, aren't they?  Mary's concerned with who created it.  John's into how it was created.  So why do they argue?

Scientists think they have now discovered how God made the world.  (Yes, scientists!  About half of all scientists believe in a personal God.)

Our ancestors thought that God took dead, "inorganic" clay, and changed it into living, "organic" bodies ("human" means humus-man, clay-man).  But according to our scientists, God built His life-force into the very atoms and molecules of His universe at the very beginning, so that they would automatically evolve into His children - us!

So no, evolution can't tell us WHO created us, only HOW.  If mankind developed by evolution, you can CHOOSE to believe either
-  it was total, meaningless chance, OR
-  it was God's plan, to produce the wondrous world He wanted.

But wait!  Isn't that the same choice you had BEFORE evolution was invented?  Precisely.  Evolution makes no difference - every man is free to believe in God or not, same as always.

The tragedy of history is that Samuel Wilberforce didn't see this.  He was the Anglican bishop who represented Christ's church in the debate over Darwin's theory.  Sam totally fell into the George Bush error.  Since he knew that God exists, he was forced to conclude that Darwin must be wrong - without considering the evidence!  (The bishop was not a scientist).  And the whole church followed him into this silly argument.

Interestingly, Charles Darwin DIDN'T fall into this trap.  He was unhappy that his theory was being used as an argument for atheism - and avoided most of the public debates and meetings, using his ill-health as an excuse.

Many devout Christians are still falling into this trap.  And the Devil is ecstatic - they're all arguing about the beginning of the world, instead of whether we are honouring God today!