If the Bible isn't perfect, how can I believe anything?

Q.   If the Bible isn't perfect, infallible, how can I believe anything? 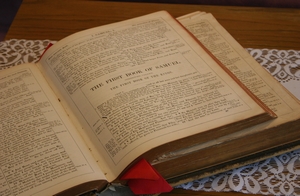 Al, nice dependable friendly Al, looked resolute and said "If I couldn't believe ONE word of the Bible, I wouldn't be able to believe ANY of it!"

This sounds noble and pure, doesn't it?  "A man of principle."  "The moral high ground".  But does it make sense?

One of us decided to learn Greek, to study the New Testament at first-hand.  He got a Greek textbook written in 1928 - very well written.  Countless thousands of students have learned from it, learned and memorized every word of it.

Now, suppose you show him there's an error on page 27 - what will he say?  According to Al's logic, he should throw away the textbook, abandon everything he's learned, and maybe give up Greek altogether?

No.  That doesn't make sense, does it.  The book is almost entirely correct, and it's stood the test of time.  So many good people have studied it and done well.  He'll go on using it - wouldn't you?

The Bible is amazingly accurate.  The Dead Sea Scrolls had copies of Isaiah a THOUSAND years older than any of our known copies - and they're almost identical, despite hand-copying for 30 generations.

Another point:  all of the New Testament was written in Greek, and we have hundreds of copies of the original manuscripts.  The Bible "versions" only come from using different English words to translate the Greek, not from uncertainty about the text.  What Jesus said is actually what He said - we can be sure of that.

But wait, didn't God inspire the Scriptures?  Didn't He arrange for us to have them?  So doesn't that mean every WORD, every "jot and tittle", must be exactly correct?

God certainly did inspire men to write, and arrange for eternal truths to be passed on and preserved, so we could read them.  Everything we need.  But that doesn't mean you can work out from the text what colour Pontius Pilate's tunic was.  He once said to Paul "My grace is sufficient for thee" ... and it is.

There ARE people who believe you can work out everything from the Scriptures.  They call themselves "The People of the Book".  Jesus met some, and didn't like them much. Their other name is Pharisees.

So yes, you can trust the Bible to tell you the truth - even if some parts sound a little confused.  After all, which is more important - knowing exactly how Judas Iscariot died, or hearing Jesus say "Come to me, you who are heavy laden, for my burden is light?"

A very neat 10-minute tour of the Old Testament