Q:  If there's a loving God, why is there so much suffering in the world? 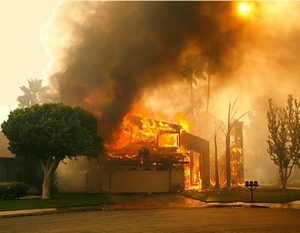 There are 3 big questions here.
-  why is the world full of disasters?
-  why do bad things happen to good people?
-  why doesn't God intervene and stop the tragedies?

Let's take the first one.  Why are there earthquakes and tsunamis?
Why are there diseases?  Why are children born deformed?  If "God so loves us", and He made the world, how come Nature is so cruel?

When you're asked this question, the person asking is often trying to prove that there's no God.  They think that atheism explains the world better than religion.  So let's compare the answers from each side.

The Bible says that God designed the world to be good, pleasing, free from disasters - but it all went wrong, there was a "Fall", and the whole world is now corrupt.  The Fall was connected with free will, and disobedience, and is temporary - in the end there will be "all things new".  But why would God let His creation go wrong?  Just to give us free will?

The atheists say the world is meaningless. We are a heap of molecules reacting randomly, going nowhere. We try to keep comfortable. But there's no reason why anything should "make sense" - it's all a random accident.

So what about, say, the neighbour whose child was born crippled? The Bible says that's part of the evil in the world.  Atheism says no, it's just random accident. It doesn't matter. There's no reason.
They're just unlucky - the molecules just didn't quite get it together. It's not "bad", or "unfair" - that's just a silly self-interested human reaction.